Shortly after 12:30 PM, Lincoln County Communications at the Lincoln County Sheriff’s Office received a 911 call reporting a wildland fire, approximately 8 miles Southwest of the town of Karval, which is in Southern Lincoln County. Karval Fire Protection District was immediately toned to the scene to establish fire suppression. Mutual aid was toned out to the Hugo Volunteer Fire Department, which is approximately 45 miles away. While fire apparatus was enroute to the scene Lincoln County Communications was updated that a structure was threatened and ultimately Lincoln County Communications received the word from the scene that this structure was on fire. By the time Karval Volunteer Fire Department and Hugo Volunteer Fire Department arrived on scene, mutual aid was requested from across the region. At one point fire mitigation was initiated near the residence of this ranch, in an effort to protect it from later winds that might arise with the evening hours. Mitigation began next to the residence and firefighters burned back towards the burn field, in order to mitigate, if the winds were to shift, the fuel load near the residence. The mitigation fire was successful and firefighters spent hours on the mop up stages, extinguishing hot spots, with a limited water supply. Multiple agencies from around the region fought this fire, and they include, Hugo Fire, Limon Fire, Tri-County Fire, Sugar City Fire, Crowley Fire, Ordway Fire, and Lincoln County Road & Bridge Department. Forty-five volunteer firefighters worked during this incident. The utility/tool structure was a complete loss and several acres of land burned. Surrounding structures, the home, and nearby rows of large hay bales, were saved from fire. No injuries were reported on this incident.
Read More 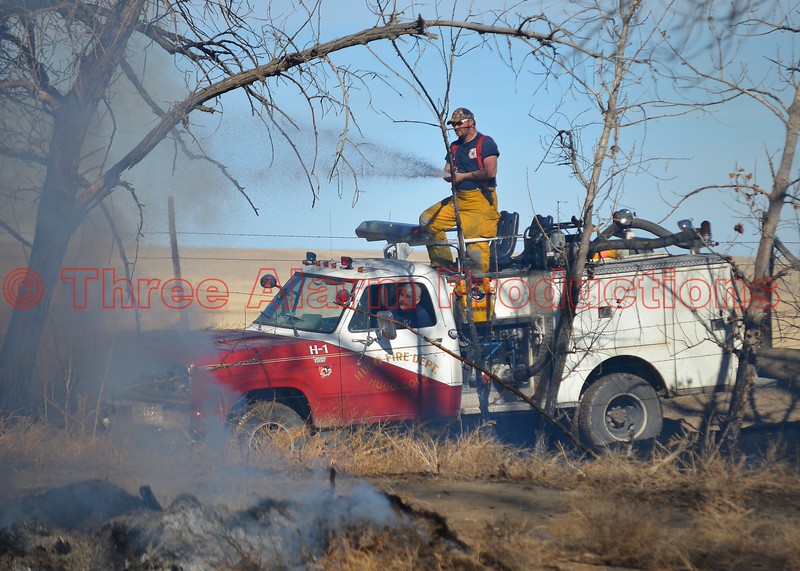